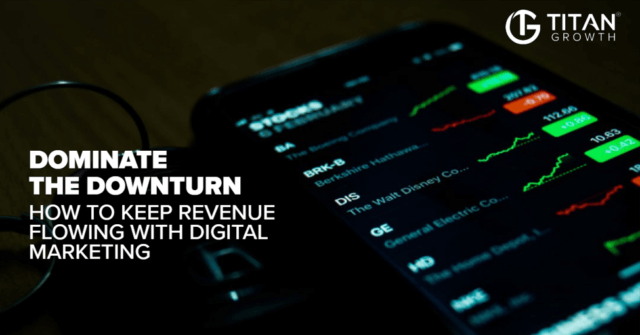 Since the dawn of the digital age, businesses and organizations have been skeptical about the Internet. In 1998, American economist Paul Krugman said Internet growth would “slow dramatically,” and compared it to the fax machine.

The Internet prevailed, and despite any trepidations, brands have consistently and increasingly decided to invest time, money, and resources into their online efforts, especially digital marketing.

In fact, it’s strange to imagine a company that doesn’t have a digital presence of some kind these days. The Internet has been instrumental in giving rise to some of the largest companies in human history, including Google, Amazon, Apple, and MyPillow.

Okay, maybe that last one is a bit of a stretch, but have you tried those fluffy pillows? Our necks have collectively been saved thanks to the Internet!

The point is, when a business executes an online strategy well, nothing can hold it back — not even a recession.

The question is, is your brand ready for the next economic downturn?

Because whether you’re ready or not, it’s coming.

When Will the Next Recession Come?

Mirror, mirror on the wall, when will the economy fall? Thanks to pullbacks in corporate investment, rising oil prices, and international warfare, a recession could be imminent.

Joel Prakken, chief U.S. economist for S&P Global Market Intelligence says “Are we in a recession? We don’t think so yet. Are we going to be in one? It’s a high risk.”

Either way, if it’s not here now, it’s looking likely.

So it’s not a matter of if, but when. And when it does happen, it will impact every business in every industry.

But things are not all doom and gloom.

Just as has been the case since the dawn of digital time, the savviest will prevail.

What Will Happen in a Recession and Why Should You Care

What exactly constitutes a “recession” is up for debate. The National Bureau of Economic Research defines a recession as “a significant decline in economic activity spread across the economy, lasting more than a few months.”

A few months? That doesn’t sound so bad, right?

Even the shortest of economic recessions can cause businesses — both large and small — to lose earnings and market share. This all comes in no small part to a drop in consumer spending habits, the impact of which lasts well beyond any defined downturn period.

Just imagine what would happen if people stopped visiting your site, buying your products, and engaging with your brand for an entire month. That’s an incredibly long time on a business calendar, especially when it occurs during, say, December. Rankings would drop, bottom lines would fall, and lead generation would stagnate.

And that’s just the tip of the iceberg.

Worst of all, most companies tend to believe that this is the time to start cutting costs, only to find that they emerge from the economic downturn much less profitable and weaker than they were pre-recession.

So we find ourselves back where we started, left with a single question: How will your brand survive the impending recession?

The answer is digital marketing.

Why Digital Marketing Can Save Your Ass(ets) During a Recession

While spending more on marketing during a recession might sound counterintuitive, it can be one of the smartest decisions a company can make.

Businesses and organizations must rethink their strategies in a recession.

Just because an organization has high visibility on the Internet today doesn’t mean it will last forever – or even a couple of months. No rank is safe, or ROI immune to volatile change.

Companies that understand this better than others have made the wise decision to reinvest even further in their online activity.

Because despite all the bubble bursts and downturns over the years, the Internet has continued to surge forward.

Despite the fact the entire country (and likely world) is on the brink of recession, there are a lot of burgeoning opportunities to leverage online. Those who take advantage of them with a well-executed digital marketing strategy will undoubtedly thrive, no matter the economic circumstances.

Let’s examine the reasons why digital marketing during a recession is crucial.

1.   The Best Defense is a Cost-Effective Offense

Certain digital marketing strategies pay off exponentially because of their cost-effective, creative approach to a specific niche or subject.

One notable example of this is the Dollar Shave Club’s launch video.

The video went viral in 2012, smack dab in the middle of a growth recession.

While the video is not solely responsible for the company’s success, its role was significant. Since launch, it’s been viewed over 26 million times. Over 12,000 people signed up for the subscription service within just 48 hours of the video’s debut. Just as valuable, the video’s charm and tone set it apart from the competition.

And yet the video only cost about $4,500 to make. To say the least, the strategy paid off.

Dollar Shave Club eventually boasted hundreds of millions of dollars in revenue. Unilever, one of the largest companies in Europe, eventually acquired them for $1 billion.

Dollar Shave Club was able to utilize a cost-effective marketing campaign to achieve what many larger organizations would not have been able to accomplish, at a fraction of the price.

It’s reasons like this that will make video marketing one of the most profitable strategies over the next decade. Not to mention a very cost-effective way to keep revenue flowing during a downturn.

The savings don’t end there. Consider also the rise of the micro-influencer.

It is no secret celebrities can charge massive amounts to promote products or services online. For example, Kylie Jenner, who boasts over 147 million Instagram followers, charges over $1 million per promotional Instagram post. Of course, many small businesses don’t have the marketing budget to approach these top-tier influencers about a potential collaboration. But there is still an opportunity: micro-influencers.

Micro-influencers are a cost-effective way to generate massive awareness (and sales) via social media. They are usually categorized as influencers with between 1,000 and 100,000 followers.

And it’s not just about saving money, either.

Micro-influencers often have a closer relationship with their followers and are viewed as more of a “trusted source.” There is even evidence to suggest marketing with micro-influencers might be a smarter investment when it comes to engagement.

Of course, the success of any influencer campaign depends on what metrics you are considering.

There is no reason that an organization can’t still use their resources to run effective micro-influencer campaigns during a recession.

Big picture – digital marketing offers real-time campaign tracking, which allows for quick shifts in spend levels and budget allocations if something isn’t working. Adjustments to strategy can be made midstream, as opposed to many other more rigid business operations where they cannot.

And don’t forget the value of low investment, high-yield channels like SEO, paid media, and email marketing, which are digital marketing staples and pay dividends over the long term.

The right kind of analytics can help companies, no matter how hard the world is crashing around them.

Of all aspects of business, few provide more or better metrics than digital marketing. While having the ability to analyze every inch of a campaign, blog, landing page, video, or tweet can be overwhelming, it ultimately provides valuable insight in ways most other departments can only dream of.

And sweetest of all, these metrics reveal value in the most inconspicuous of places.

Digital marketing can also make measuring the LTV much simpler than traditional channels. Here, businesses can predict the value of a customer over their entire lifetime, during downturns and beyond.

Knowing this can help inform executives and marketers when to pivot their digital marketing strategy during a recession and focus on the cost of acquiring customers. Likewise, organizations can continually adjust and improve marketing campaigns to meet both their financial budget and business goals.

All thanks to the power of digital marketing tracking.

There are plenty of other standard ways to measure a marketing campaign, such as monitoring web traffic and sales metrics. However, marketing is about much more than just sales these days.

Often, companies can use metrics to find the right brand identity and voice that leads to a real relationship with the consumer. Build a strong enough relationship, and customers will remain loyal — waiting out tough times to re-engage with their favorite brands as soon as they can, even if the economy prevents them from doing so in the present.

Speaking of which, knowing how to keep your current customers happy is one of the best ways to weather a recession. The right metrics can lead to the right strategies — like remarketing and incentive campaigns — to make that happen.

The fact that digital marketing is so measurable is a huge win for both large corporations and small businesses.

Digital marketing can help businesses figure out the right strategy at the right time for the right business. During a recession, this kind of measurability could prove to be the integral reason why your business not only survives, but thrives in a downturn.

3.   An Opportunity To Experiment

When times get tough, it’s easy to understand the need to cut costs. A company’s financial future could depend on it.

However, there is evidence that suggests cutting ad spending during a recession is a bad move. On the contrary, a recession can actually be the best time to come up with more innovative and creative strategies. You know the saying, when one door closes, another opens? We’re pretty sure it was created to describe digital marketing during an economic downturn.

Take it from Angela Ahrendts, CEO of Burberry, from 2006 to 2014. She stated during her time there: “I was taught never to waste a good recession.”

As mentioned above, one of the obvious reasons is digital marketing tends to be more cost-effective than other marketing methods. Companies can also adjust their brand identity and message to target new demographics more easily using digital marketing.

Versatility is more than just a new approach to marketing. New mediums continually emerge online that can provide a diversified portfolio to mitigate risk.

Take Snapchat, which launched in 2011, right at the end of the Great Recession. Many companies realized the video platform was uber-effective when it came to marketing to millennials — a demographic less impacted by the economic downturn. In 2012, the app boasted 100,000 daily active users. A decade later, it now has over 332 million. Companies that took the “leap” to invest in a new medium like Snapchat at a time when it was generally advised to hide all your money under the mattress, reaped the benefits in the long run.

Examples like this make it easy to see how experimenting with new opportunities, even during a recession, can prove to be a wise decision in hindsight.

That’s why companies, in preparation for the coming recession, are already strategizing how to take advantage of digital marketing platforms.

Get Recession Proof with Digital Marketing

While a recession might prove to be challenging, investing in digital marketing during an economic downturn is imperative to keep revenue flowing and spur growth.

You might find that it can be a real buyer’s market during a downturn for digital marketing.

Digital marketing is an incredible way for businesses of all kinds and sizes to perfect their brand messaging and target new consumers all over the world. During a recession, all this adds up to digital marketing being a wise, high-return investment.

Here’s one final question to answer…

Would you rather be a fax machine or MyPillow?

Because one of those invested in digital marketing, and the other, well…

We Are Titan Growth Breaking the Mold on SEO and Paid Media We deeply care about client success. Growing revenue and profit is what we love to do, and we do it by providing technology-driven, results-oriented digital marketing strategies aimed at increasing market share.